Deborah Pietsch comes via the world of Hollywood, as an award-winning producer, switching gears in 2010 to allow an additional ‘calling’ to reveal itself as a cutting-edge spiritual teacher, healer, telepathic communicator and Activator. Awakened in 1987, Deb was opened up like a “tin can” multi-dimensionally. She has gone through a decade of “Activations” which have accelerated her abilities to traverse dimensions 24/7, communicate telepathically, as well as understand unexpected situations such as infiltration, the hijacking of humanity’s great awakening, the energetic effects of 9/11, the reversing energies of the Law of Attraction and much more.

Private clients and students around the world experience profound alchemical shifts as Deb brings forth detailed and confirmed telepathic communication, unique teachings, insights, experiential tools AND high frequency Light to Activate their I AM Presence, 13 DNA Codes, 3rd eye and more. She masterfully clears blocks, entities and infiltration from people’s energy field, projects and homes. Through experiential tools, she empowers people to learn how to clear their own energy fields, re-calibrate, up-level and communicate with their Higher Selves and Beings of Light Guides. Additional teachings and Activations include establishing and anchoring your Free Will, Sovereignty and new status quo of well-being.

Says Deb, “Based on the revealings of the Designed Assault Against Humanity and the hijacking of the Great Awakening, this is foundational work for everyone on the planet who desires to awaken and transcend. It’s serious work and it’s is not for the mamsy pamsy!! The nefarious things that have been going on across the planet, just below the surface of ‘normal reality’, are affecting people’s daily lives in ways they have no idea about.”

In 2009 Deborah experienced another profound awakening with a visitation from a Light Being along with a week long ongoing telepathic communication of details that “humbly blew her away”. Many of the details communicated during that conversation have come to pass, as well as still unfolding. Shortly after this experience, Deborah unexpectedly went in front of the camera to start an iTV and radio show called, “Wake Up…Shift Is Happening TV!” She has interviewed many guests, as well as utilized this platform for Activating Unified Fields of Light and Reality for the Betterment of Humanity. The show has been down for several years and slated to re-launch in May/June 2018.

She developed the I AM Awakening Academy, as well as online retreats, such as “Creating Your Reality”, “The 3 Day Cocoon Retreat” and Project Leap Frog. Along with, Scott Bartle, her husband and spiritual partner since 2013, both have been providing details and information about the Deception Matrix for many years; all of which are just beginning to be revealed in the MSM. Deb and Scott are Way-Showers to teach people how nefarious aspects of the current reality, aka the Enslavement Matrix, are affecting people’s daily lives. They then provide the tools, teachings and Activations to shift their experiences and reality to be aligned with their client’s heart’s desires and aspects such as Soul Matrix Destiny. They spoke at the 2014 Conscious Life Expo together, have hosted several episodes of “Wake Up..Shift Is Happening TV”, and were guests on Sean Stone’s Buzzsaw. They also produced and hosted a panel show during the 2015 Superbowl that was a Counter Protocol of Light to the nefarious agenda of the half time show.

Highlights of her past includes decades of high profile clients in the entertainment & advertising industries, and in 2000 becoming Lisa Garr’s, The Aware Show, first producer.

Deb and Scott have been out of the public and working “behind the scenes” from January 2016 until April 2018, at which time, their new site www.TranscendTheMatrix.com launched with new shows, new retreats, new tools, teachings, speaking engagements and more. Having recently been called back to work in the public and media again, they travel to and from Los Angeles, CA – the belly of the beast of Hollywood to shine the light on darkness. “It’s time to powerfully shift the collective consciousness and “narrative” back to a level playing field of LIGHT; bringing a new era to Lights, Camera, Action through profound transformation and good ol’ authentic Love!”

New Video From Deb~Build It, They Will Come Great Awakening Global Community~You’re invited
“I AM” by Kaleb Searcy & Jon Pupillo ~ Deeply Powerful & Moving
Breaking! Deb & Scott Live on RedPill78 Friday, May 1st ~ Coming Back Into Public After Several Years of Intense Behind the Scenes Work!

Don't get stuck in a rabbit hole - Transcend The Matrix - 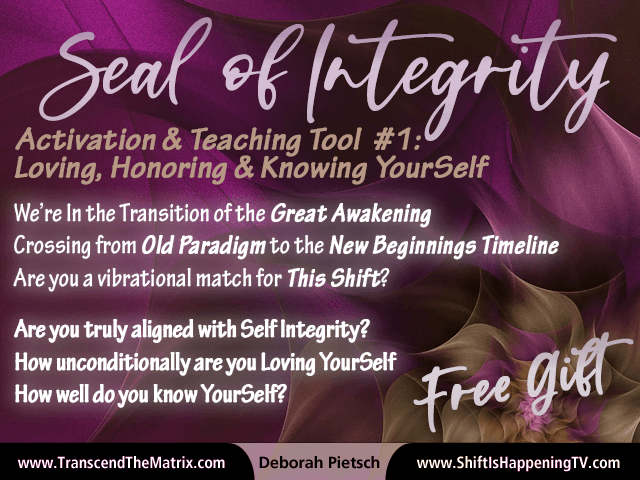