Rewind back to 2012 following the launch of my documentary What The FUQ - Frequently Unanswered Questions of the "Australian Government", which tracked the saga of importing my 1959 Chev Corvette into Australia... I was doing various internet radio shows and interviews with online radio stations in Australia, New Zealand, Sweden and the USA.

Rewind even further... back to 2009, I was only just starting to discover there was something really wrong with 'the system'. I'd grown up with bed time stories from books like 'Alternative 3', 'Above Top Secret' and others, detailing secret programs in government, so it wasn't a total shock... and yet it was all very 'unbelievable'.

I began the process in 2005 when I bought the Corvette. It took me 4 years to restore it before being ready to import it to Australia.

When I applied to import my Corvette into Australia, a process that took 9 months just for the approval, I began seeing double standards. There was one set of rules for the rule makers, and another for the 'subjects' (I'm being very polite here calling the people 'subjects'... just wait 'til later).

If you're thinking this is just a car story... hold on. The details are important to understand the mechanisms of the 'system' and their influence on each of us. What I'm encouraging here is to identify similar instances - not from the perspective of the car, but the illogical. Ready for a deep dive?

The Department of Transport created the Pre-1989 Guidelines, a document that was work-shopped to industry with Power Point presentations explaining it. It was meant to "make it easy ..." In Australia, if a vehicle was manufactured before 1989, it was exempt from certain design and safety rules applicable to modern vehicles. It also fell into different tax brackets. To a car enthusiast, it's a big deal to have an original vehicle, not a re-manufactured one. It's not all that cool to have 2005 re-manufactured car versus a '59 Corvette.

The Department denied my import application quoting from their Guidelines in doing so. Subsequently, I studied their Guidelines even more closely. Together with my father, we poured hours of study into them, and prepared a new submission on appeal of their original decision.

We found examples of Corvettes that had been converted into drag cars - with massive engines protruding through the bonnet (hood) and parachutes out the back. One Corvette we found had been transformed into a hearse. We found another Corvette that had been merged with a Mercedes; using the chasis, engine and suspension of a 80's vintage Mercedes under the body of a '59 Corvette. We argued these vehicles were examples of re-manufactured, which on a scale of modifications, by comparison, made mine look like a minor restoration.

But that logic and reasoning didn't satisfy the Department. Instead, they quoted from their Guidelines again, selectively and illogically, to deny my import approval. OK... it gets worse. You'll need more backstory on the Guidelines to appreciate the illogical rationalizations...

None of those occurred in the restoration of my Corvette. It had a Chev engine fitted, out of a 2005 Corvette. The suspension was from a 2005 Corvette etc. And it definitely doesn't look anything other than a convertible. No change of Make, Model or Category !

All these tests relied upon a sequential process. If THIS changes, then THAT is the RESULT. What the Department did in my case, was to determine a result FIRST, namely they thought it was re-manufactured, THEREFORE its make and model must be different. Illogical !

So I appealed their decision pointing out their logic was flawed and made submission to the Administrative Appeals Tribunal. I prepared the following diagram to show how they were interpreting their own Guidelines: 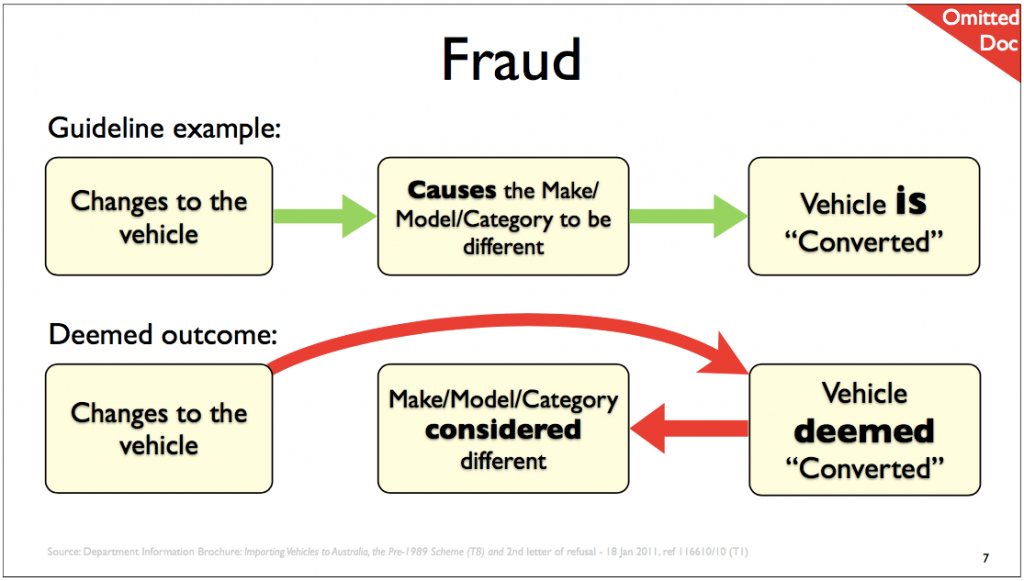 Their response escalated the illogical to a new level. The Department denied my ability to rely upon the Pre-1989 Scheme Guidelines as they were apparently not law... just guidelines. At this point I was starting to see the double standards. This was a document that was published on their own website as a tool for people to use to determine if their vehicle was suitable for import. It was a document that had been presented to industry to help them understand the regulations.

Ultimately I won my appeal through the Tribunal, though not in a way that could effect any change in the way the Department operated. The Tribunal effectively said my car looked like a 1959 Corvette, and therefore it must be one. There was no mention in their findings that the Department had interpreted their Guidelines incorrectly, nor that other people could rely on them... it seemed like an attempt to make me go away, but not affect the way the Department does what it's been doing.

The illogical decisions had me react incredulously. I was asking repeatedly; "How can they reach that conclusion?", "How does that make sense?" etc. I could not reconcile the illogical. We'll get more in depth behind the reasoning of the illogical and how it affects us in future webinars and blog posts.

Have you encountered an infuriating scenario when dealing with government? A scenario where they didn't even follow their own rules? Have you experienced a decision that impacts your life that was illogical and didn't make any sense?

Deb's hubby, spiritual & business partner. Professional rabbit hole diver on the Enslavement Matrix bringing simple explanations to the deception and distraction keeping us from ascension. Creator of What The FUQ documentary.

Great Awakening, Wake Up Shift Is Happening, Waking Up With Deb, We Are In This Together Backstory